I have the best insurance in California but nobody was willing to pay to see if my genes could help me feel better. So, I decided to sign up for Prairie. 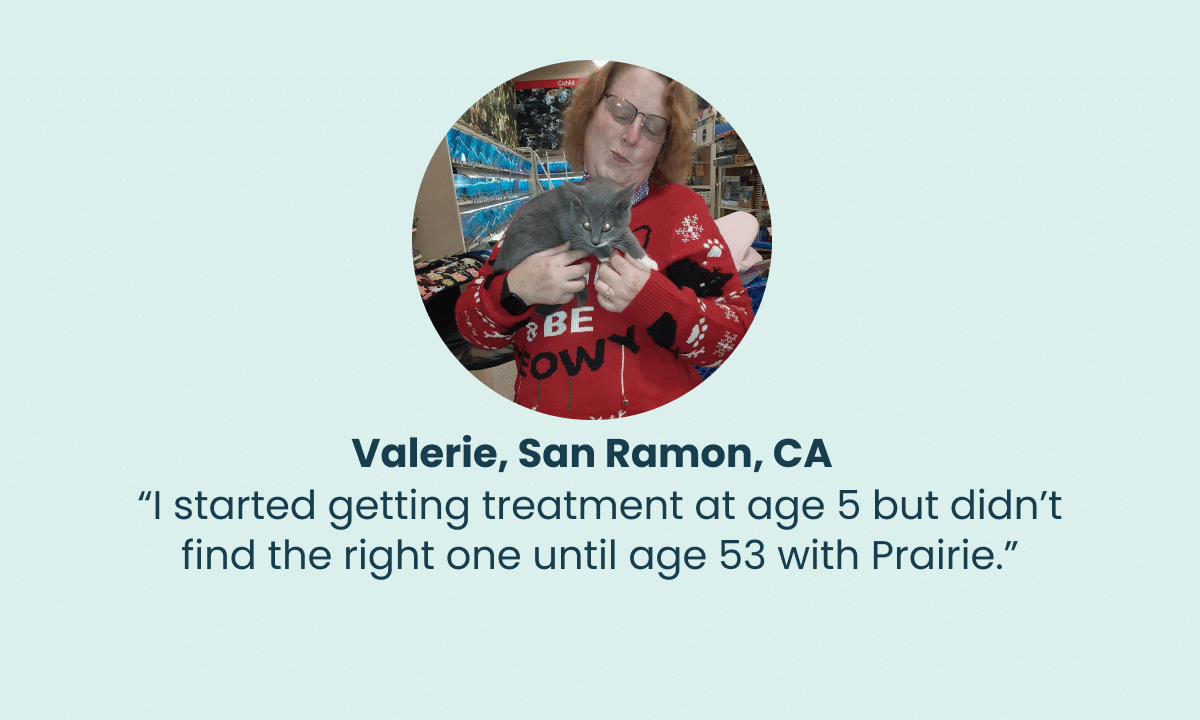 By Valerie, from San Ramon, CA

Where My Story Begins

My mental health struggles began when I was young. During my childhood, I suffered abuse from my grandfather. When I tried to speak up about what happened, I was dismissed by my mom and my school counselors. (I didn’t have my father to lean on, either; he had been arrested in front of me when I was little.) As a result, I was withdrawn and afraid of telling the truth. The psychiatrist I saw when I was a teenager only ended up traumatizing me even further.

I thought that I had put these experiences behind me when I became an adult. However, one day, I was involved in a hostage situation at a bank. The arrival of police triggered my PTSD from seeing my father get arrested. That, combined with the terror of the hostage situation, caused a severe mental health episode. I knew then that I needed help.

I found a psychiatrist who started me on a medication, but it just made me feel sullen, withdrawn and plain stupid. I could just feel this fog slipping over my mind whenever I took it. Over time, I tried various different medications, but none of them really worked.

I started to see another counselor and psychiatrist, but neither of those experiences were positive. For example, the counselor made me feel stupid for crying, and this psychiatrist misdiagnosed me as bipolar just because I mentioned my brother was bipolar. And then things went from bad to worse: first my cat died, then my aunt and my cousin, all within a matter of weeks. I knew I needed support, but nobody was really listening to me and making my needs a priority.

My Experience With Prairie

Around that time, I saw an ad for Prairie on Facebook about medication and genetic testing. I normally blow past ads, but the idea of the test intrigued me. I wanted to get a test to see where things went wrong with my previous medications. I have the best insurance in California but nobody was willing to pay to see if my genes could help me feel better. So, I decided to sign up.

When I joined Prairie, I was matched with Dr. Ravi as my psychiatrist and Amy as my Care Partner.

Because of my past, I often have issues trusting people, especially men. However, I have nothing but good things to say about Dr. Ravi. He’s worked hard to put me at ease and make me feel better. After getting my genetic test results, he told me, “I can see by this result that this medication is not going to work. I can also see by this result that this medication won’t work either. So let’s do this instead.” Getting a prescription isn’t a guessing game like it has been before. It’s based on actual science, not the trial and error of “this might work”.

My Prairie care team also provided me with a lot of emotional support. When my mom passed away in January, they were right there, helping me work through the emotions I was feeling. Without Prairie, I probably would have ended up in the plot right next to my mom.

My Care Partner Amy has also been checking in on me every step of the way. Even now, she texts me at least once a week just to see how I’m doing. Working with her and Dr. Ravi has really been profound. They’ve helped me turn a lot of my depressive thoughts into constructive thoughts. I think that finding the right support network is key, and having them has been the right combo for me.

Before finding Prairie, I would come home in tears all the time. Now, I’ve only cried twice since my mom died, and those weren’t frustration tears or anger tears. They were grief and sorrow tears, what they were supposed to be. I wouldn’t have been able to respond to my life this way if not for the support I’ve received.

After finding Prairie, I feel like I’m in a much, much better place, and I can see the future with a clarity I didn’t have before. I’m no longer expecting something to fall apart every day. Instead, I’m looking forward to retiring, sitting on a beach somewhere in the tropics. Now, I can see light where before it was all dark.

Why I’m Sharing My Story

I’m 54 and standing here, telling you that it absolutely does get better with the right treatment. I started getting treatment at age 5 but didn’t find the right one until age 53 with Prairie. That’s a long time, but I got there. I’m proof that it’s possible.

I really hope for a brighter future for everybody, and if I can, I want to do what I can to help someone out, maybe even save their life. I’m here today because of the support and encouragement I’ve had over the years. My great hope is that if I share my story, I might help someone realize they need help themselves, even if I never know that I helped them.