Mental Health on the 2020 California Ballot 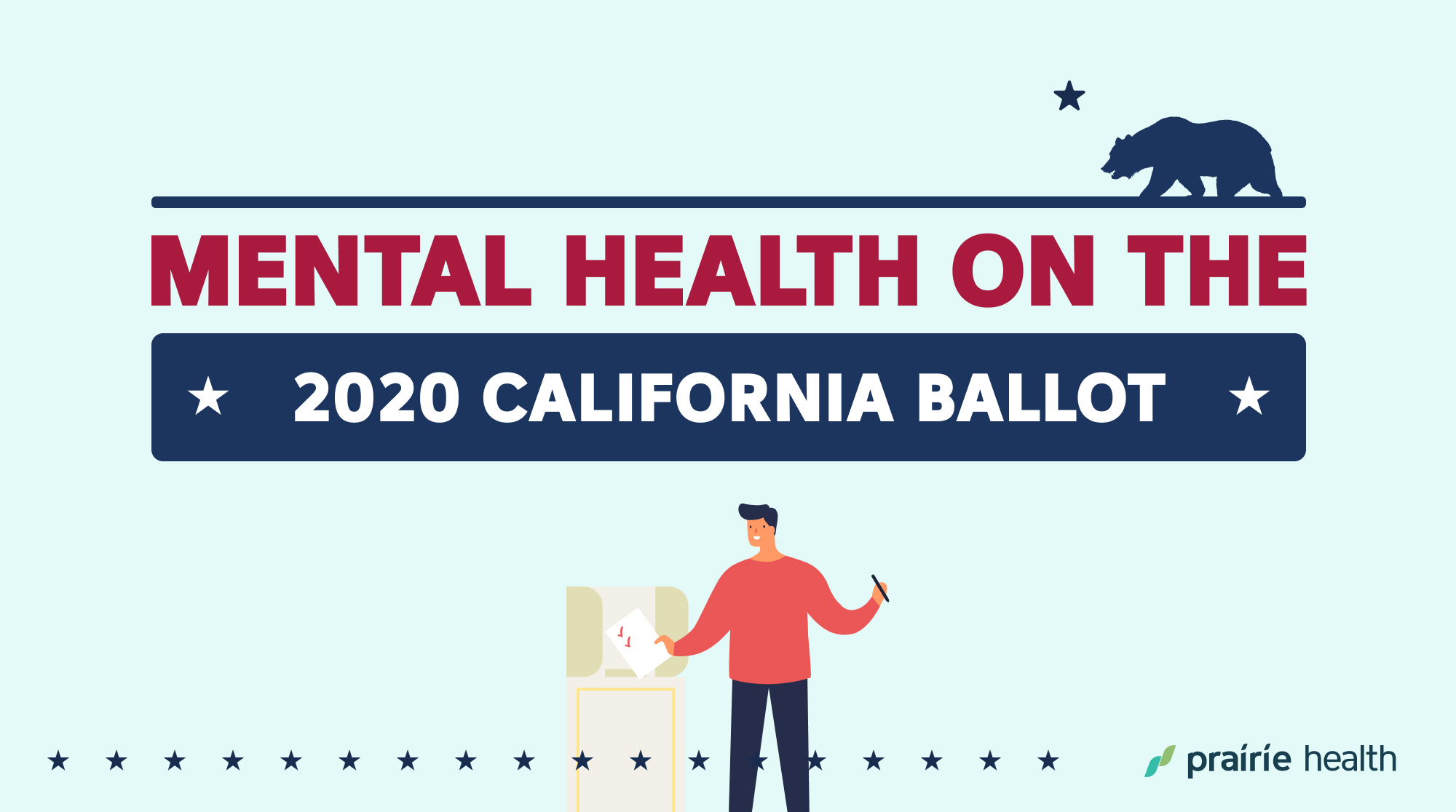 Updated November 9, 2020 with the results of the ballot initiatives. 5 of 6 initiatives passed.

With the 2020 election just around the corner, it’s natural to fixate on the presidential and congressional races. However, there are many important policies on the ballot this November, from municipal level all the way up to the federal government with the president. Mental healthcare is one such area of policy that hasn’t garnered the attention worthy of the current mental health crisis we’re facing.

Even before COVID-19, infrastructure for mental health and addiction services was already fragmented, overburdened, and underfunded. Baseline demand was already high — 1 in 5 Americans reported having a mental health condition in the last year. The number of people actually seeking treatment for their condition has increased in the last few decades. This is partly because stigma has decreased, especially among younger people.

It gets worse. There are too few psychiatrists and other mental health workers to meet the need for this increased demand. Furthermore, private insurance, which covered more than two-thirds of Americans in 2019, pays 14% less for mental healthcare compared to Medicare. Plus, your problems are much worse if you’re one of the 26 million Americans without any health insurance at all. This population is already at increased risk of mental illness.

And then COVID-19 happened. Since March, the pandemic has caused mental wellbeing to plummet nationwide, as research and manydifferentarticles have been shown. Our ability to commune in person has decreased, while insecurity about health has increased. Uncertainty has added more stress and the employment rate has plummeted, taking a toll on people’s mental health as well as their employment-based health insurance. So it shouldn’t come as a surprise that 40% of Americans reported struggling with mental health and substance abuse issues in June according to the CDC –double the normal rate.

If you believe that healthcare is a basic human right, then increasing investment in mental healthcare to ensure everyone has access to quality care is a moral imperative.

But there are also many economic justifications. This becomes all the more important since many policies and ballot initiatives involve increasing taxes, debt, or finding other ways of financing better care.

To start, it’s important to understand that mental disorders are the costliest conditions in America — over $200 billion dollars annually in 2013. That’s more than diabetes, cancer and heart disease, which we typically think of as the most expensive conditions. They indeed used to be more expensive than mental disorders.

The implicit cost of mental illness is much higher. According to a study by the World Health Organization, workers tend to be less productive, take more time off work, pay less in taxes, and rely more on government safety nets while managing their disability. This ends up costing the global economy more than $1 trillion per year. That huge number is expected to grow to an astronomical $16 trillion by 2030.

Now here’s the good news. The WHO found that for every $1 invested in mental healthcare, governments can expect a $4 return on their investment.

The return on investment for mental healthcare is 4x.

California has seen some of the benefits of this type of investment already with Proposition 63. In 2004, Californians voted to implement a 1% tax on people with annual income of more than $1 million to fund mental health services. Research is starting to show the benefits. In Los Angeles County alone, that revenue increased access to care for 130,000 young people. Another study showed a dramatic decrease in the number of mental health-related emergency room visits as a result.

Whether for moral or economic reasons, investing in mental healthcare is something everyone should get behind.

At the County Level

This policy is also part of an overarching movement for racial and social equity. The county would be prohibited from using the money on prisons, jails or law enforcement agencies. People of color, particularly black Americans, people from low-income communities, and people with mental illnesses are incarcerated at disproportionately high rates. That’s especially true in Los Angeles County, where the jail is California’s largest mental health institution. By funding prevention programs and alternatives to incarceration, proponents say the policy would prioritize care over punishment.

SF has one of the highest unhoused populations in the country — right behind Seattle, Los Angeles, and Bay Area regions like South Bay and Alameda. More than twice as many homeless people have died this year in SF compared to the same point last year. This has largely been driven by the pandemic and the city’s mental health and drug crises. There were also over 450 overdose deaths in SF from January to August this year, already exceeding last year’s number.

Proposition A combats substance abuse and other mental health conditions by supporting those at the greatest risk.

Measure O would instate a 0.25% sales tax. The estimated $25 million in yearly revenue would support mental health and addiction services.

Sonoma County has disparities in mental health across socioeconomic and educational background, as well as racial / ethnic identity. Among those living below the Federal Poverty Line (FPL) in Sonoma from 2005–2009, one third reported “fair” or “poor” mental health. The same statistic applied to those without a high school degree. Rates of low mental health were also higher among Latinx populations than white ones. And these disparities extend into healthcare access. Those living below the FPL were more than four times as likely to be unable to find necessary medical care.

In Sonoma County, drug overdoses accounted for more than double the number of deaths than car accidents. In 2017, 25% of the county population had an opioid prescription. Measure O is an opportunity to improve mental health and decrease substance use disorders for hundreds of thousands of people.

At the City Level

Measure A proposes issuing up to $900 million in bond revenue to fund low-income housing, mental health and substance abuse services. The bond revenue would come from an estimated property tax levy of just $3 for every $100,000 in assessed value. This would increase to $21 over the span of decades. That means for a home assessed at $500,000, there would be an additional $1.25 in property taxes each month. This measure has generated the support of housing contractors, homelessness nonprofits and the San Diego County Taxpayers Association, among many others.

Motivated by the city’s homelessness crisis (4th highest rate in the country), supporters say it provides an incredible opportunity to get people permanently off the streets and to prevent those at risk from falling into homelessness. Plus, the measure ensures the funding for mental health services are in place to provide the necessary support. The need has never been clearer, with overdose deaths in SD increasing by more than 50% compared to pre-pandemic rates, with an average of three people overdosing each day.

Update: Measure A did not pass because it did not reach the 66.67% supermajority required (57% voted Yes).

This measure continues to be popular in Santa Rosa. A survey found that 60% of local residents support renewing a sales tax measure to protect city services like mental health and protect local funding.

Measure E in WeHo would implement an additional 0.75% sales tax, generating an estimated $11 million in yearly revenue. This would address the revenue shortfall due to COVID-19, maintaining the services and local businesses residents have indicated are important. These funds would specifically support mental health services, public health, homelessness, public area maintenance, and health services for people with HIV/AIDS.

The need for this type of support in West Hollywood is clear. The homeless population rose by over 30% last year, a rate almost three times more than that of L.A. County overall. In 2014, UCLA predicted that 14% of West Hollywood residents are in serious psychological distress. That’s significantly higher than the 10–11% in neighboring cities, and the 9% in Los Angeles.

Mental Health Elsewhere On Your Ballot

We’ve covered some of the main ballot initiatives explicitly related to mental health. However, there are many other measures and propositions where your vote can indirectly support mental health. Here are just a few ways in which it intersects with other key policy areas:

Addressing mental health has never been more urgent and important. That’s why it’s critical you cast your vote, and make your voice heard in every level of government.

Our blog has more articles on the importance of supporting mental health, such as its time to tackle stigma and why we need to talk about women’s mental health.